EQUATION CORRECTIONS - Part 2 : THE INVENTION OF THE KIDNEY CAM
The true mechanical equation clock was made possible by the kidney cam. This cam's shape encoded the Equation of Time and, if rotated once a year, could power a clock hand to show solar time.
Whether the kidney-cam was invented by Christian Huygens or Robert Hook is open to debate. Certainly Hooke, through his brother who lived in London, was in touch with London's clockmakers and claimed the distinction. On the other hand, Robert Hook also claims to have been the inventor. He was an experimental genius second to none, with a huge interest in horology and Thomas Tompion was his friend and disciple. It was the manufacture of a perfect quadrant that Tompion made to Hook's design in 1674, that propelled the former into the London's intellectual & social limelight. 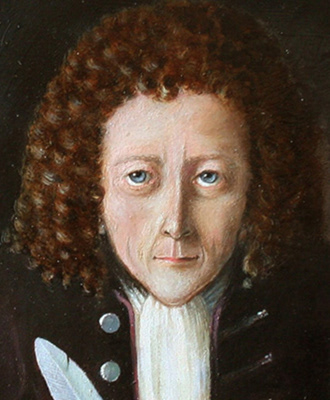 Robert Hooke - 1635-17. There is no actual picture of him. This is a modern image based on contemporary descriptions of him as "in person, but despicable" : "melancholy, mistrustful, and jealous" : "cantankerous, envious, vengeful": "somewhat crooked, pale faced" 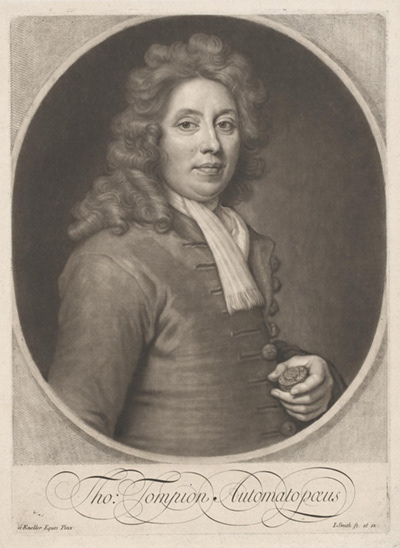 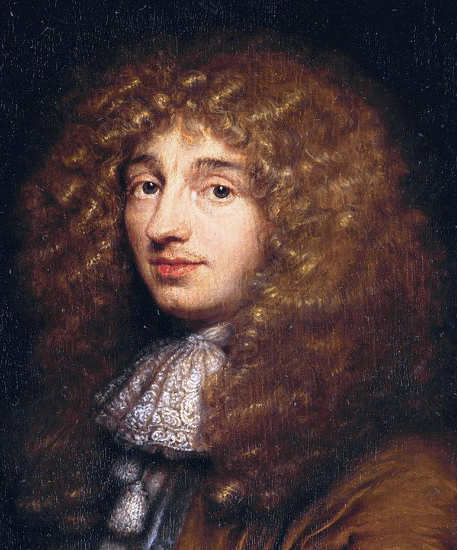 a) KIDNEY CAM CLOCKS WITH ROTATING MINUTE RING
There is argument  as to who pioneered these clocks, whether Thomas Tompion for the King Charles II of England or Joseph Williamson/Danial Quare for King Charles II of Spain. The latter clock was probably lost in a fire in the Alcazar in Madrid in 1734.
The Tompion and the Tompion/Banger clocks illustrated below run for more than one year on a single winding. The Tompion clock bears the inscription under the dial "Tho Tompion London Invent" - which is the basis for the assumption that Hooke/Tompion invented the use of the kidney cam. Edward Banger worked for/with Tompion and married the latter's niece 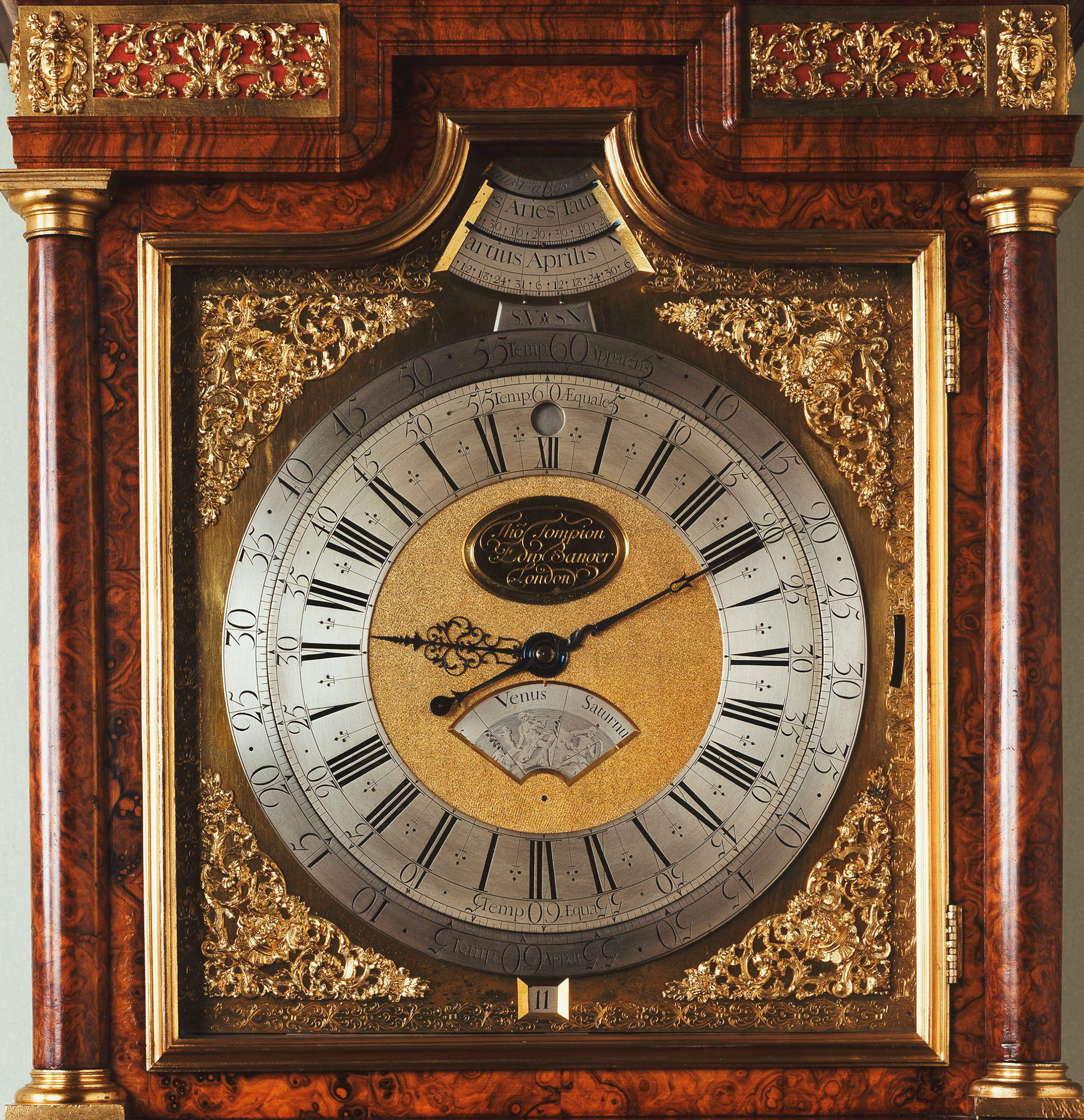 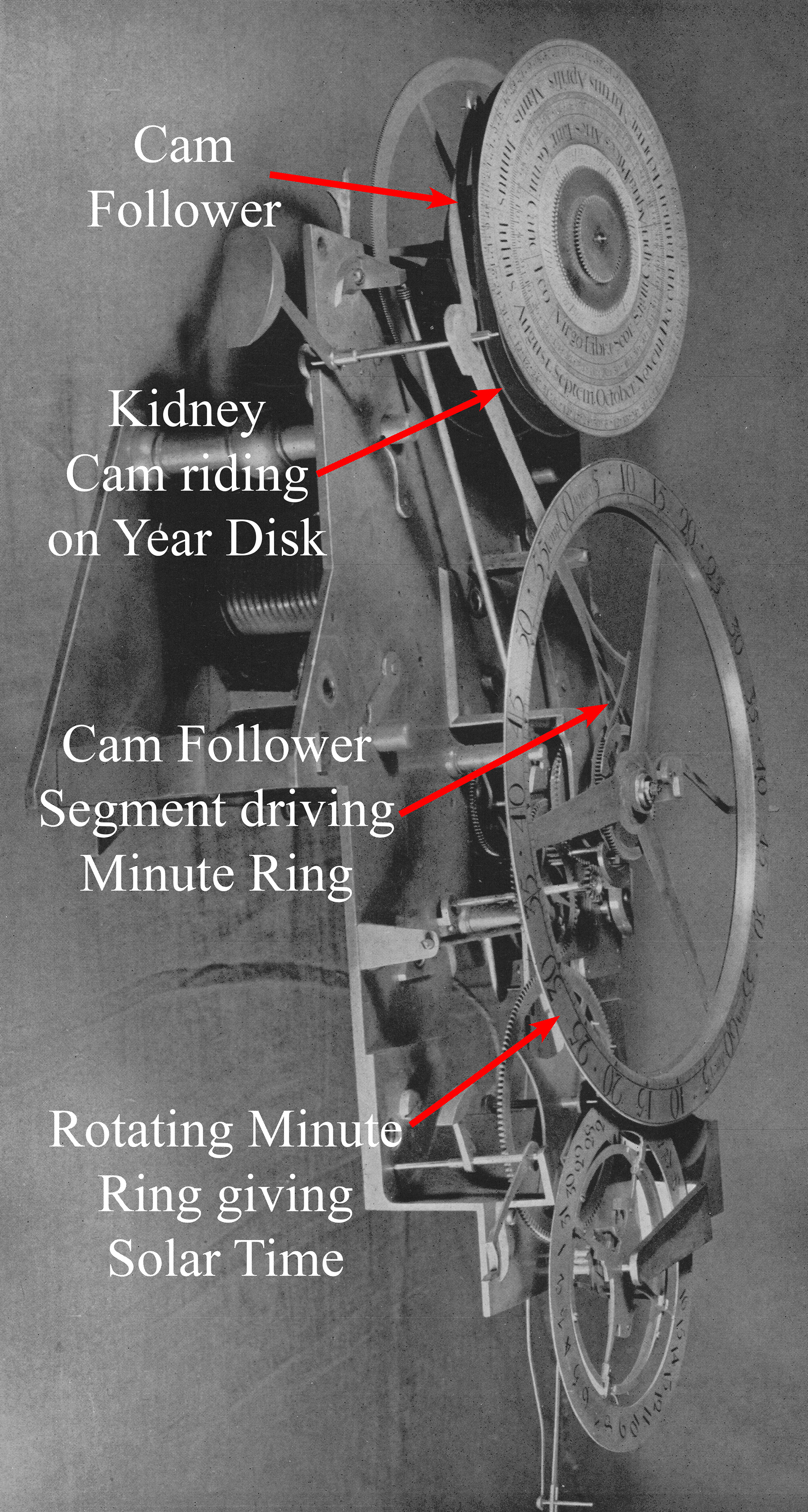 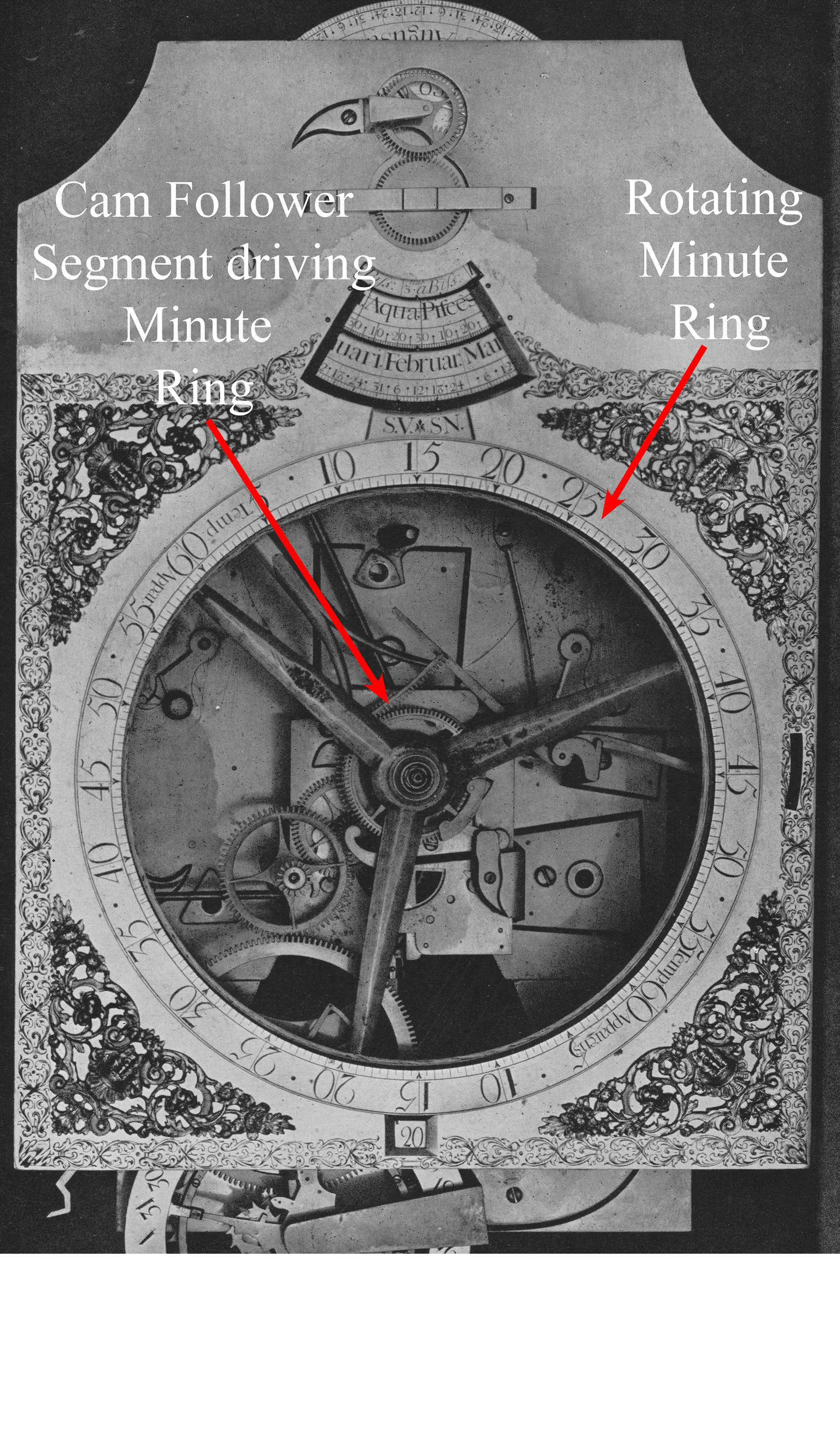 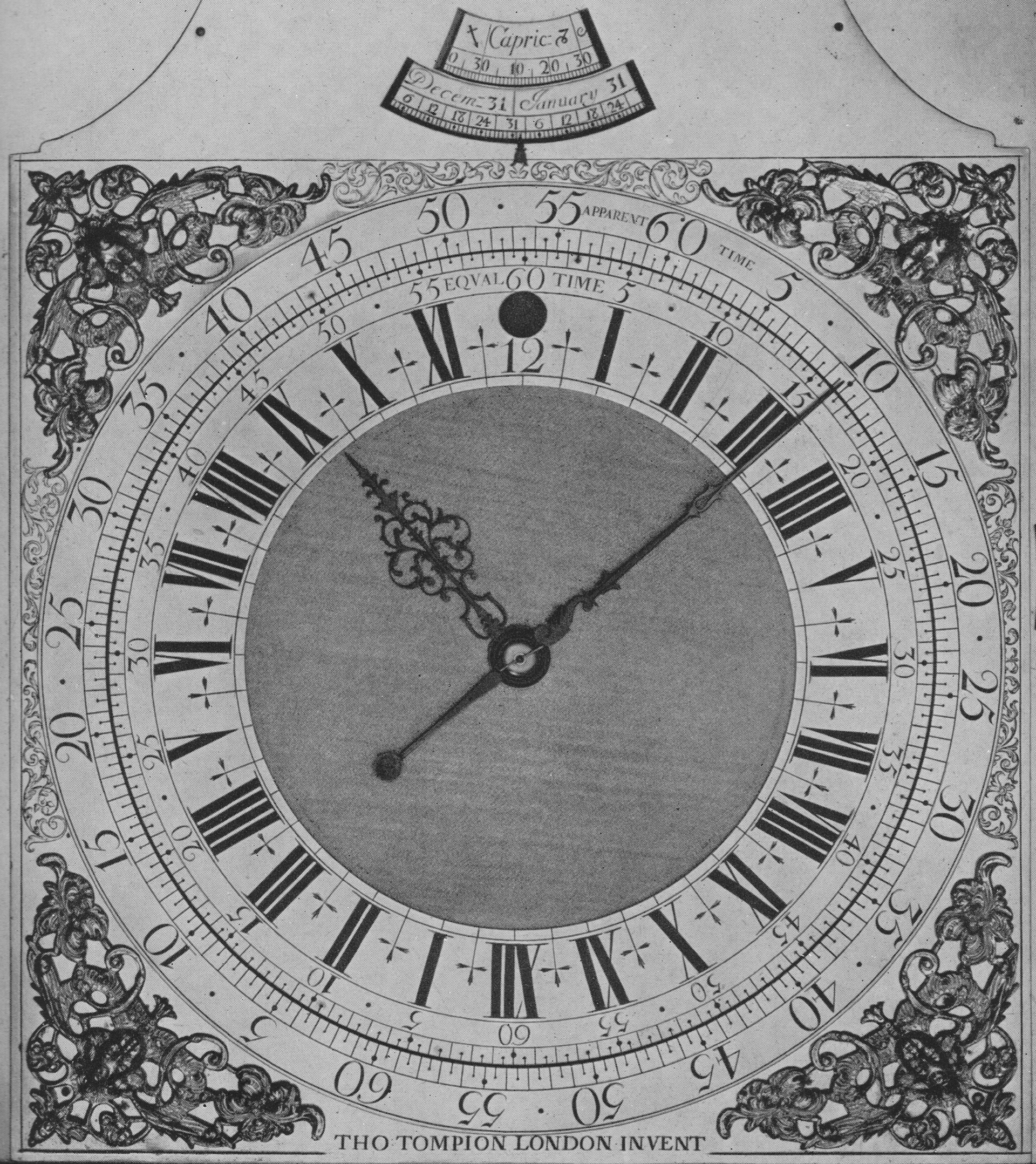 Tompion & Banger - 1703 - Showing the static Mean Time dial and the rotating Solar Time ring. Note the date is 1st January Julian calendar, being 11th Jan Gregorian, and the difference beween the two scales is some 6 1/2 mins - which is about the right value for the Equation on that date.

Click on images to enlarge & view captions
b) KIDNEY CAM CLOCKS WITH A SEPARATE HAND ON SEPARATE FACE INDICATING THE EOT AS CLOCK FASTER or CLOCK SLOWER
Joseph Williamson working for Danial Quare made a number of these type of clocks. Share made the main clock, Williamson made the equation mechanism that was a separate device. The most magnificent is held in the British Library - shown below. 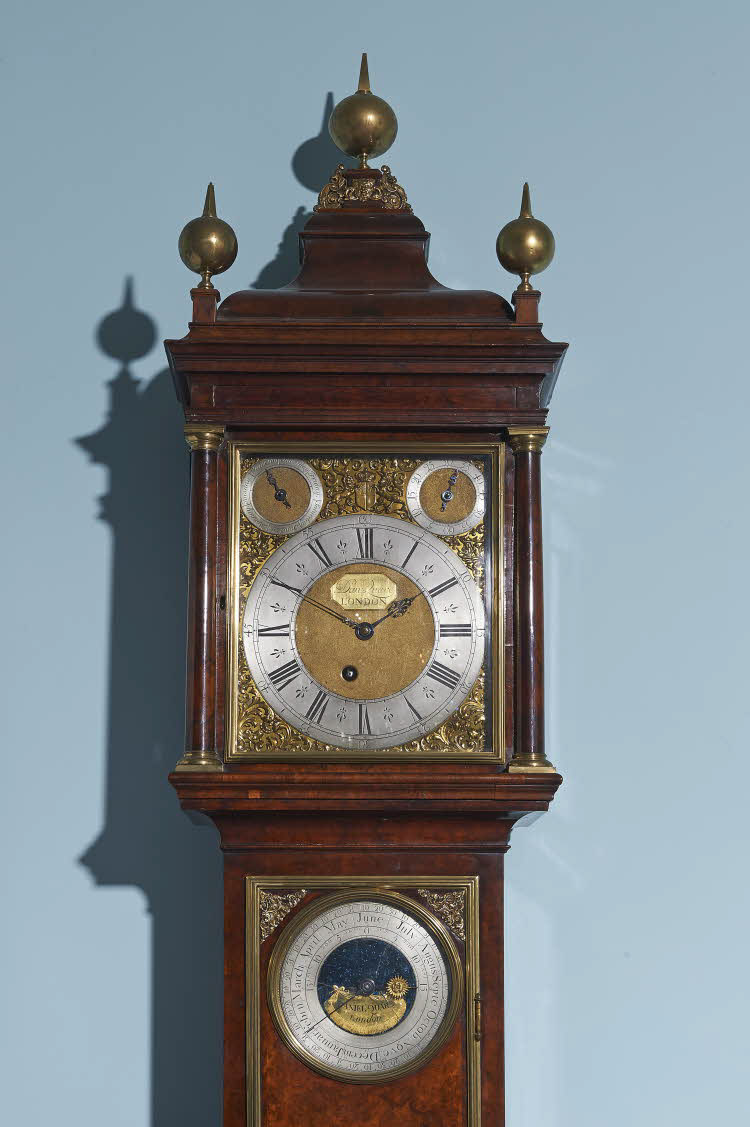 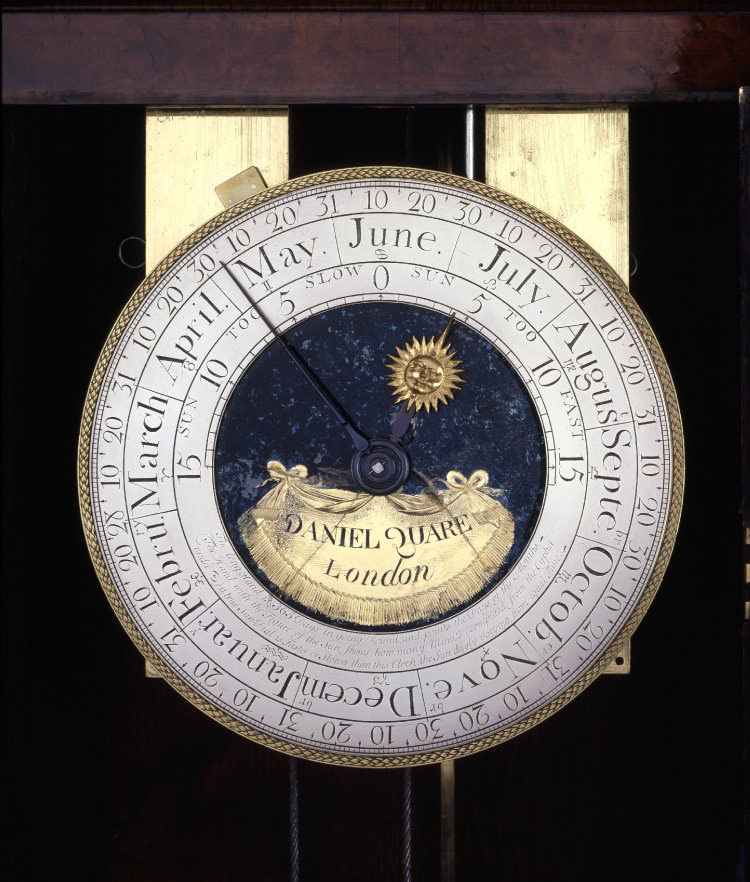 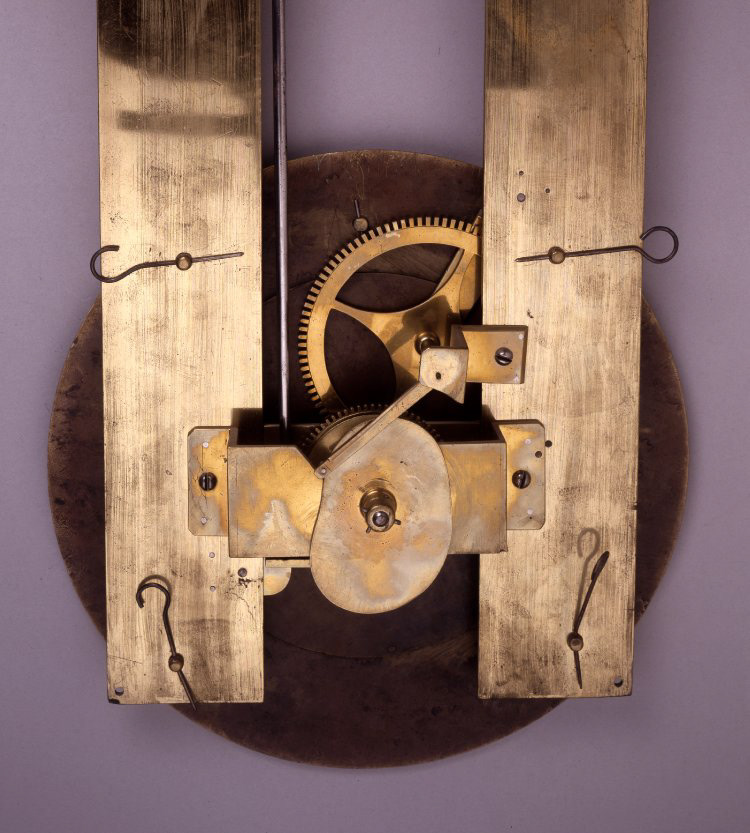 Danial Quare/Joseph Williamson - 1710. Showing the Kidney Cam driving the Equation Hand. The Vertical Shaft comes from above turned by the main pendulum drive.

Click on images to enlarge & view captions
c) KIDNEY CAM CLOCKS ADDING THE EQUATION TO MEAN TIME TO GIVE MEAN AND APPARENT TIME
The next major improvement came, once more, from Joseph Williamson in 1720, when he succeeded in mechanically adding the Equation of Time to pendulum derived Local Mean Time to produce a clock that indicated Solar Time. This marks the invention of differential gearing to algebraically sum two rotary motions together. (Note that every road vehicle in the world has a back axle differential : the sum of rotational torque of the back wheels = rotational torque of the drive shaft.) The clock had two faces back-to-back - one indicating mean time, the other solar time. The clock therefore was designed not to be placed against a wall. 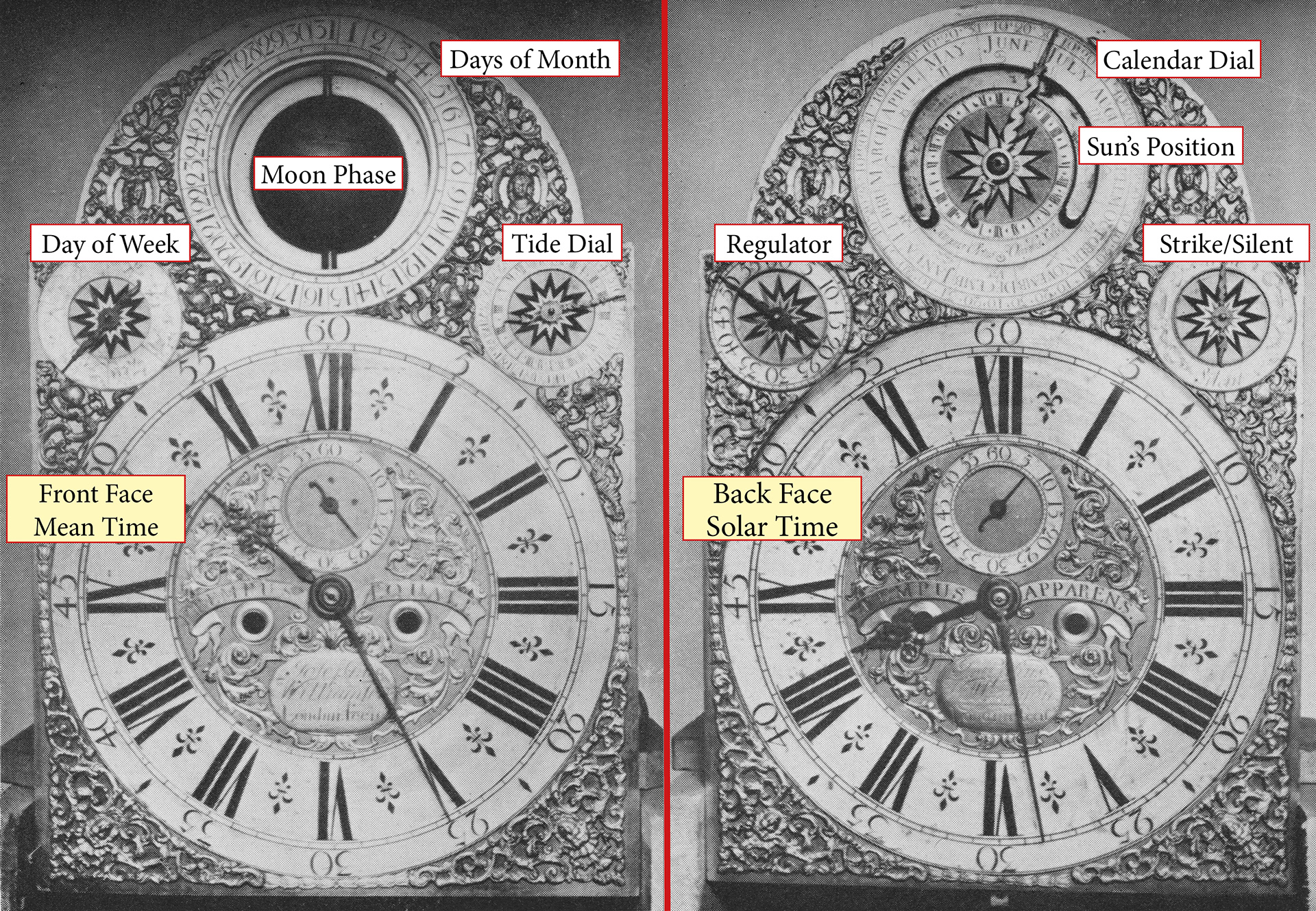 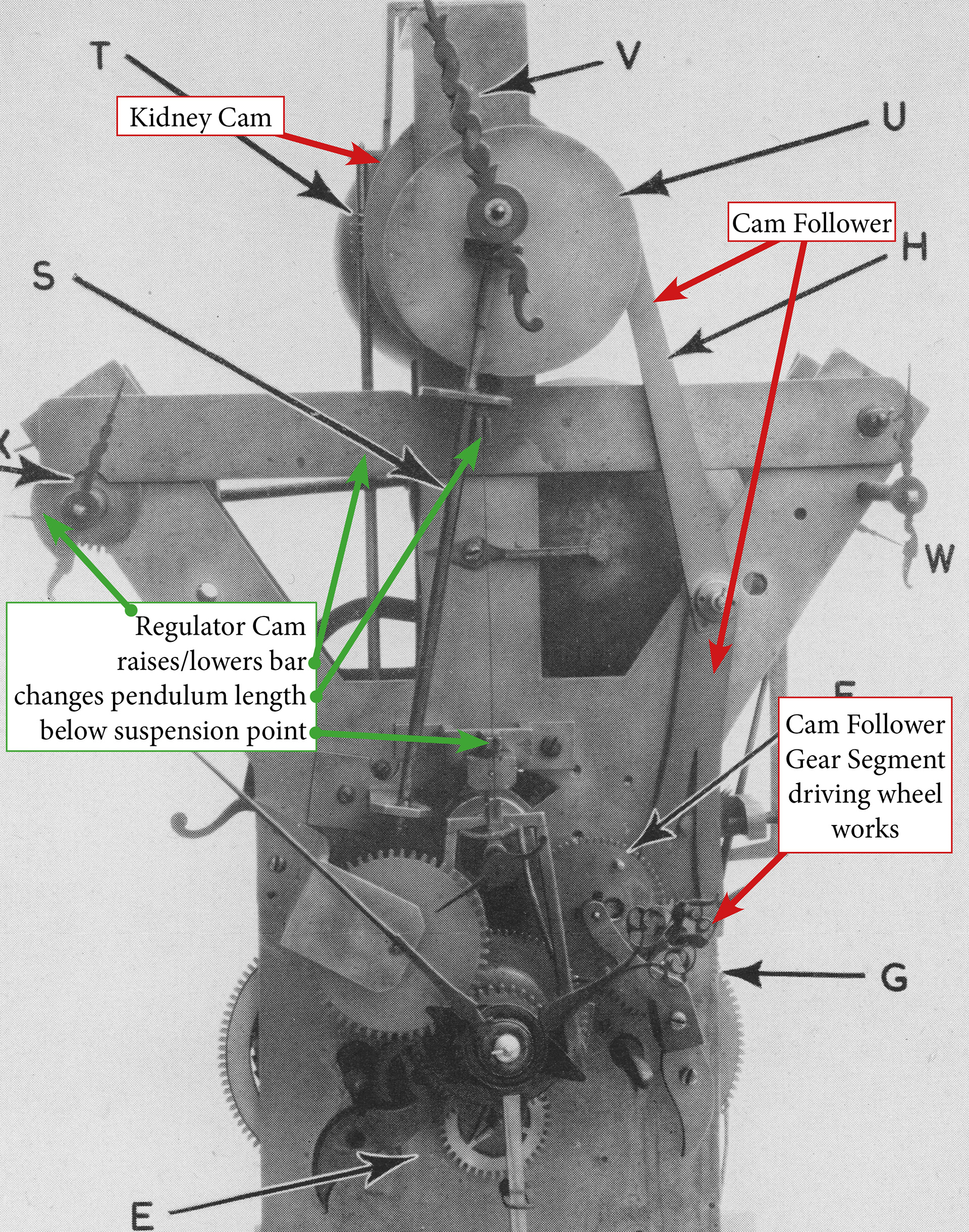 Back of Clock, showing a) in Red the Kidney Cam, Follower & Segment Arm b) in Green, the pendulum length adjustment mechanism. 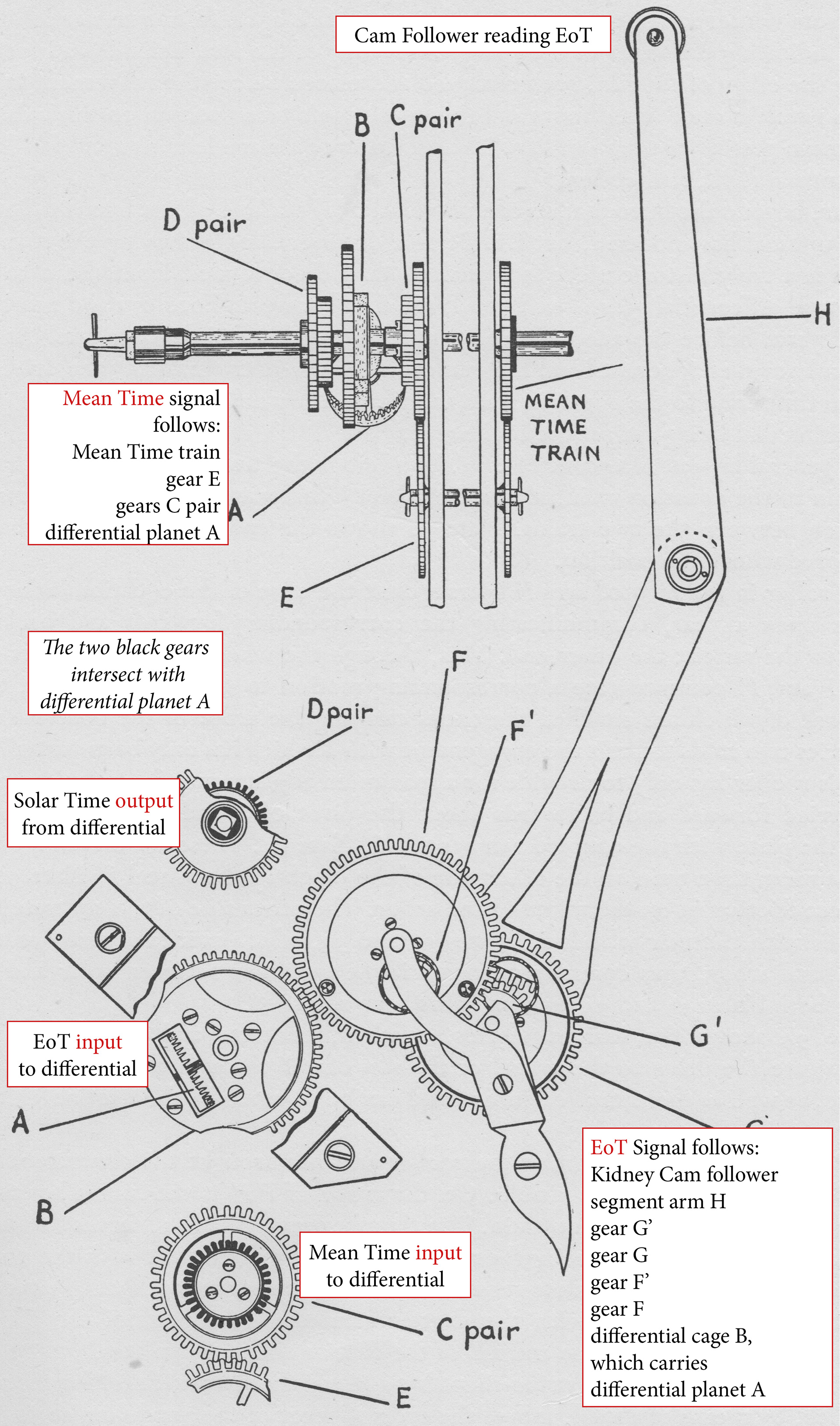 Details of the Differential Adder 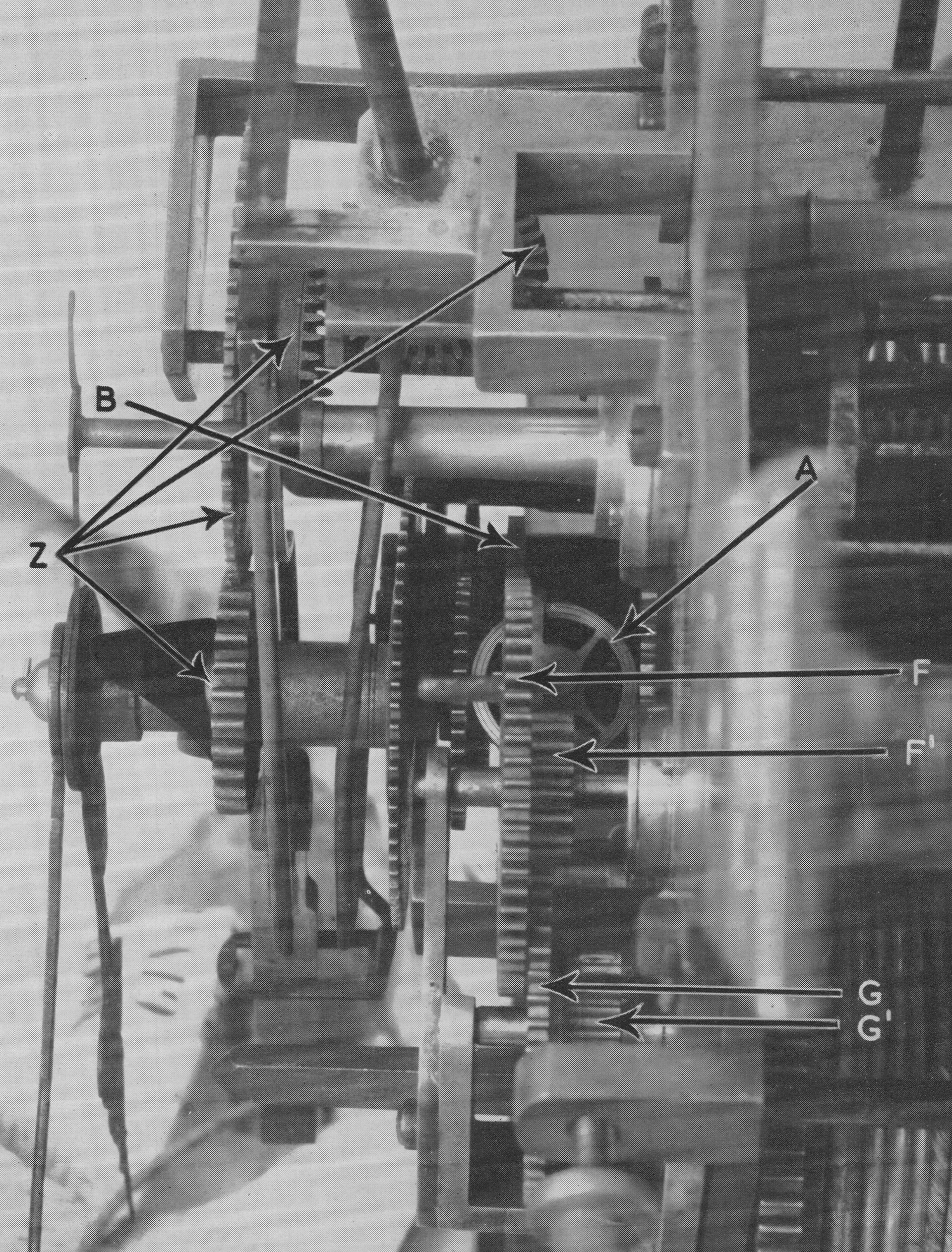 Details of the Differential Adder and in particular, the contrate planet gear A

Click on images to enlarge & view captions
Note that this clock - together with an accompanying sundial - has all the components for a complete self-regulating timepiece. The Solar Time is compared with the Sundial and any differences may be ironed out with the Regulator 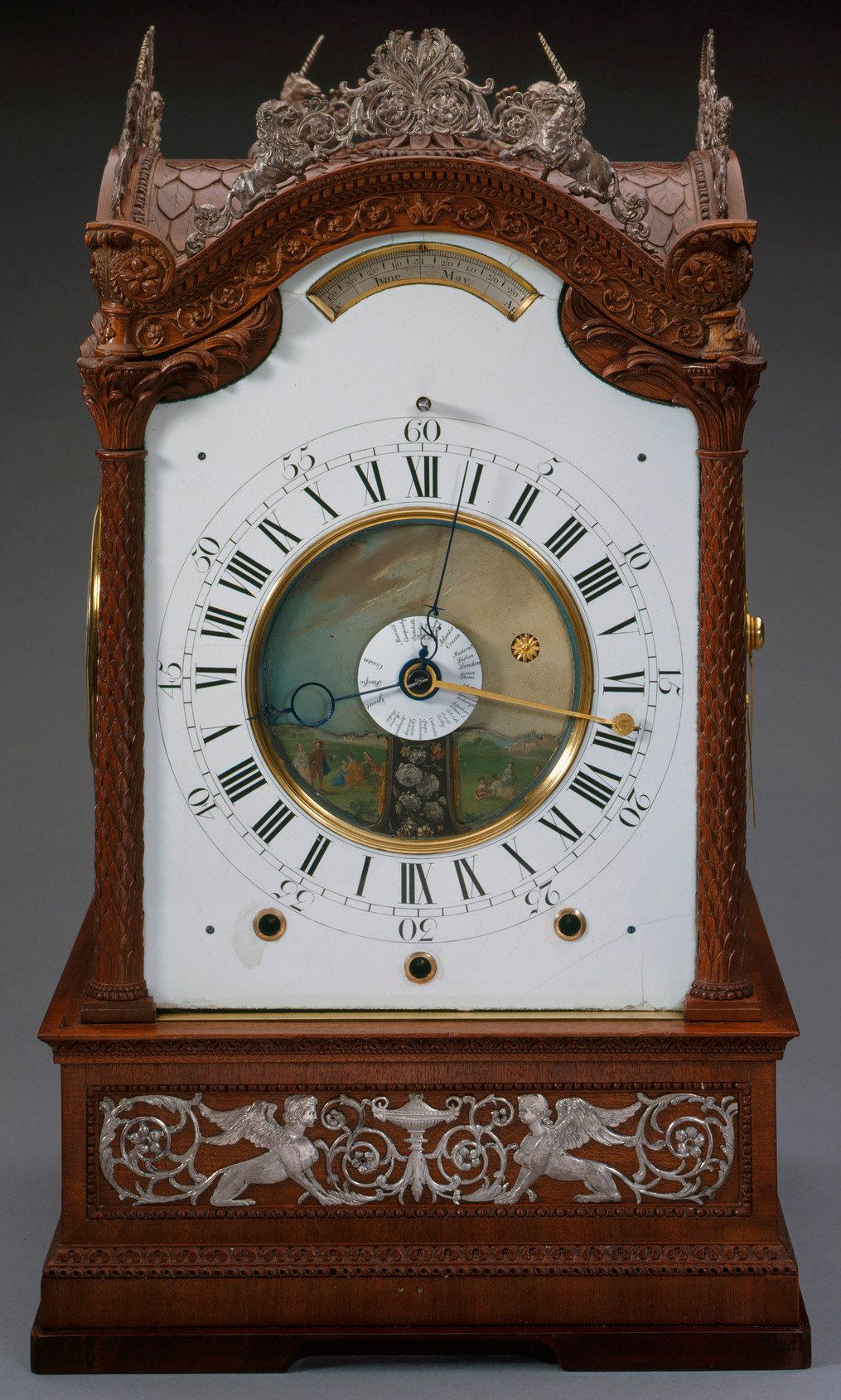 Eardley Norton - 1765 for King George III - Royal Library Windsor. Note the 24 hour dial with golden solar hand, black mean hand and position of the sun in the sky in the background. 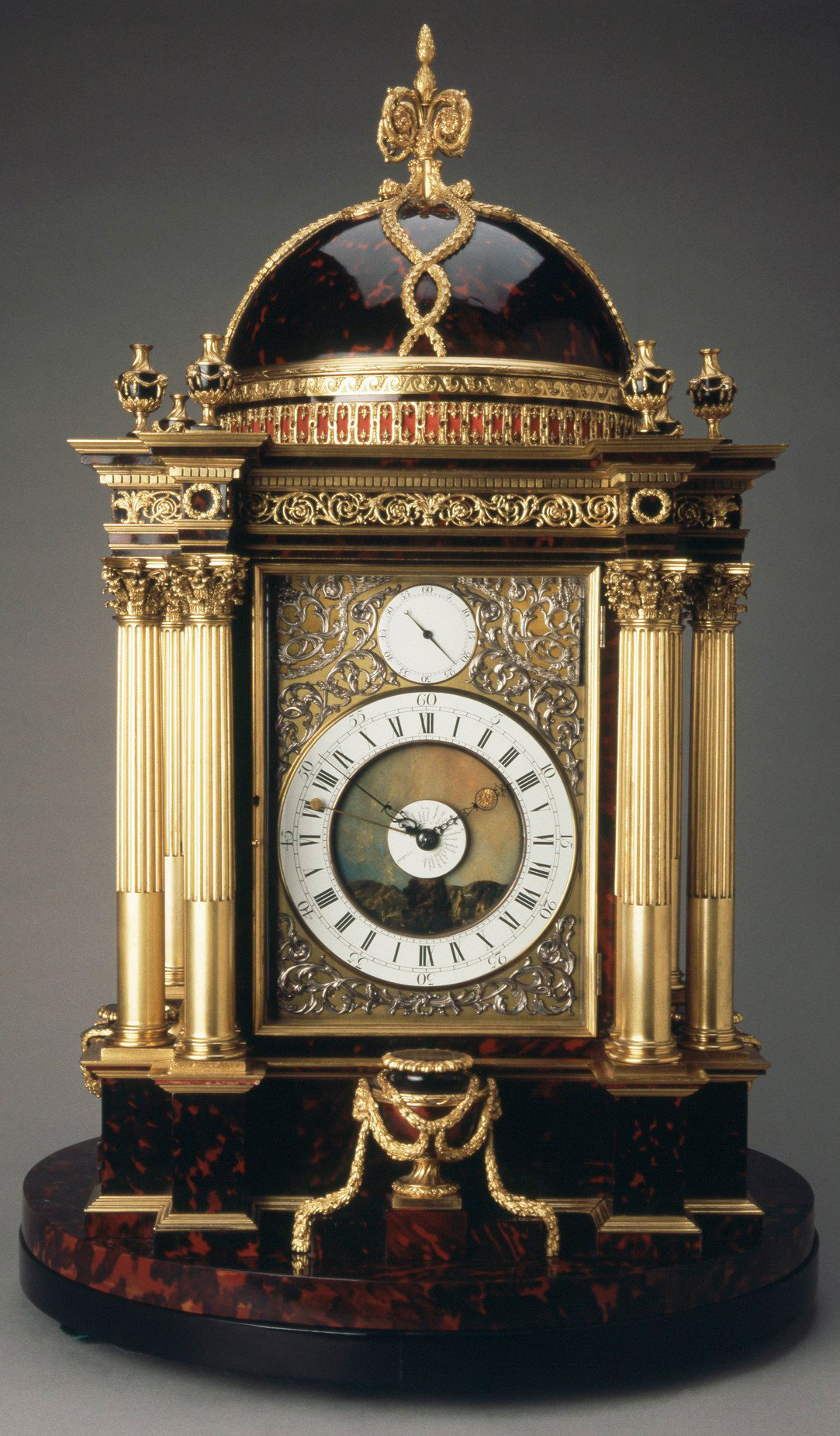 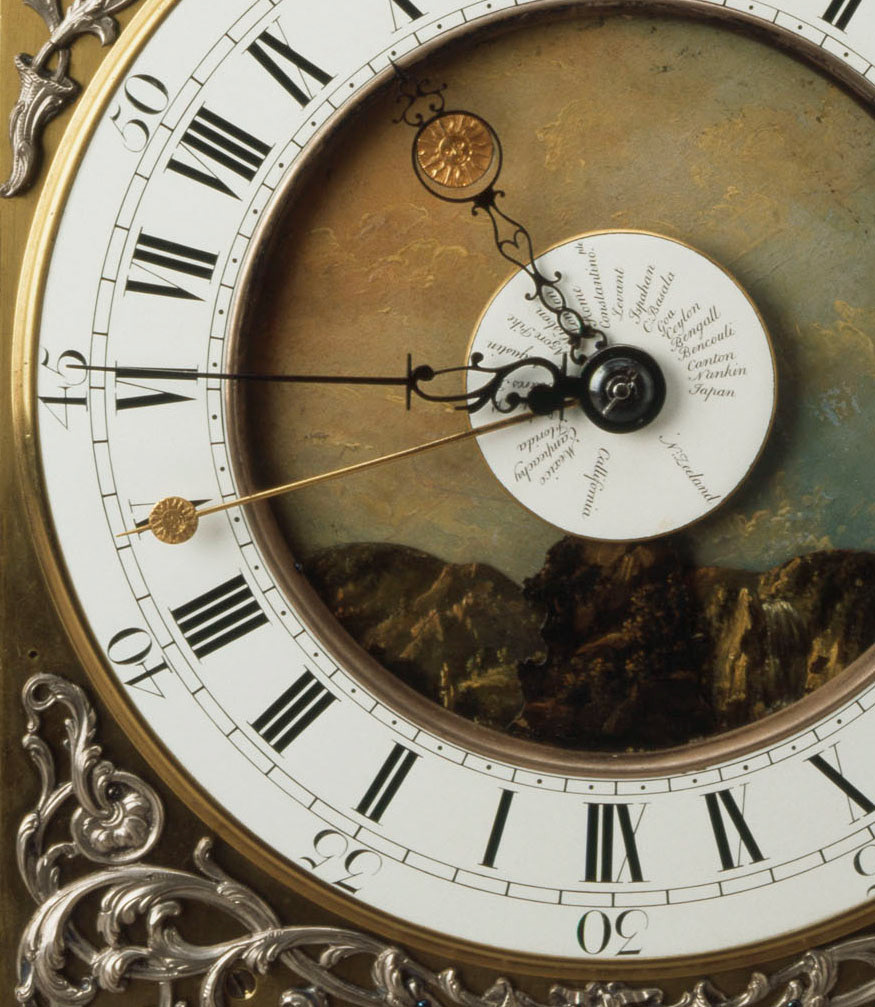 Click on images to enlarge & view captions
Two other examples form the British Royal Collection - showing mean & solar time. These were complex astronomical clocks - specifically made to the specifications of King George III, around the time of the 1770's transits of Venus. The King was avidly interested in astronomy and time-keeping. See www.rct.uk/collection
d) FURTHER REFINEMENTS.

Further refinements were made in a watch by Abraham-Louis Breguet in 1793. These involved hourly sampling of the Kidney Cam to avoid continuous drag on the cam  &  the mechanism as a whole. This refinement is illustrated - in two modern masterpieces below.
Buchanan's Deryck Noakes' Clock
See www.buchananclocks.com

“Conversion from solar mean time to true solar time is via a conventional kidney cam. As in Breguet's clock the correction is sampled once an hour and the offset left locked, with no force or drag on the kidney cam, until the next sample is taken.
The mechanism, above, is based on a pair of quadrants, Q1, Q2, mounted within the hour wheel, H, which offset the equation pinion, E, on which is mounted the equation hand, in solid gold. The offset this achieves is frozen by a long-tailed pawl, P, which locks in the finely toothed rim of the equation wheel and is realised when the tail of the pawl arm contacts the release roller, R, on the adjacent intermediate wheel, to which it is geared 1:1.wheel. When the pawl is released, the spring on the anti-backlash quadrant, Q1, tries to rotate the equation pinion anti-clockwise but is controlled by its twin, Q2, and its contact with rocker, S, pivoted onto the equation cam. As the equation release roller is small, and as it and the tail of the pawl are both mounted in the periphery of adjacent wheels, contact friction is minimal and contact time is short, probably about a minute. This arrangement has the advantage that the relationship between the two can be controlled with precision by moving one wheel relative to the other a tooth at a time.
The date-step roller, D, on the 12-hour wheel indexes a star-wheel twice per day, which through a train of (6/15 x(100/12) x 219 ensures that kidney cam rotates once per year”
Quoted from Horological Journal April 2006, with permission​​​​​​​
An modern example piece by Breguet
A modern representation of Abraham-Louis Breguet's technique. See www.breguet.com

The scythe-shaped cam follower arm is engaged to the kidney cam by the spring at the bottom of the image. This spring is normally disengaged from the follower arm by the small crescent shape in the centre. This rotates to intermittently, releasing the spring and allowing an EoT reading to be taken.

Another Modern Example by George and Cornelia de Fossard
This complex clock, other than showing national & local mean time, and moon  phase has a Solar time dial, with 24h hand adjusted for the equation of time, showing day and night length, the times of sunrise and sunset and the time of local solar noon, adjustable for longitude and latitude. See www.defossard.co.uk 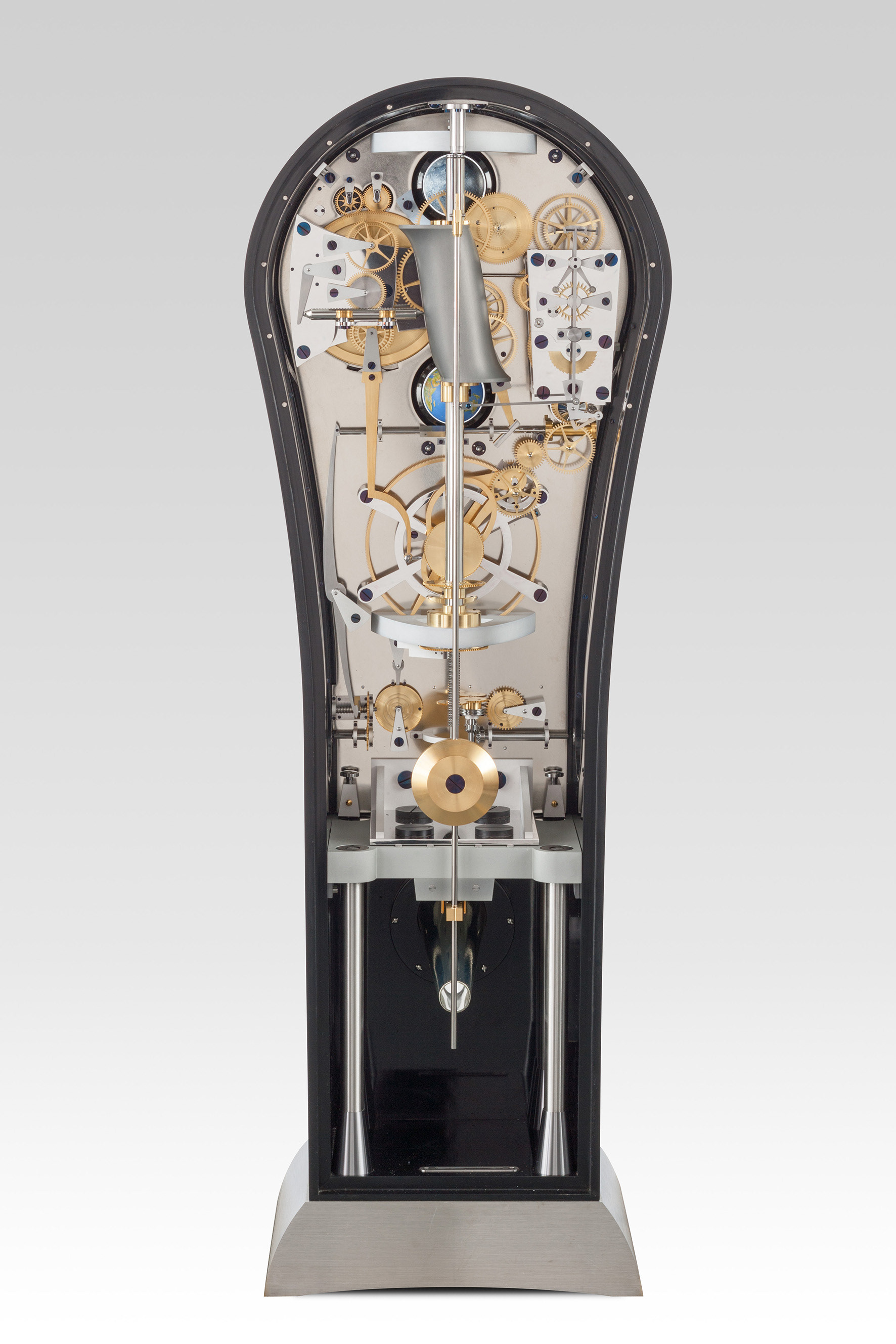 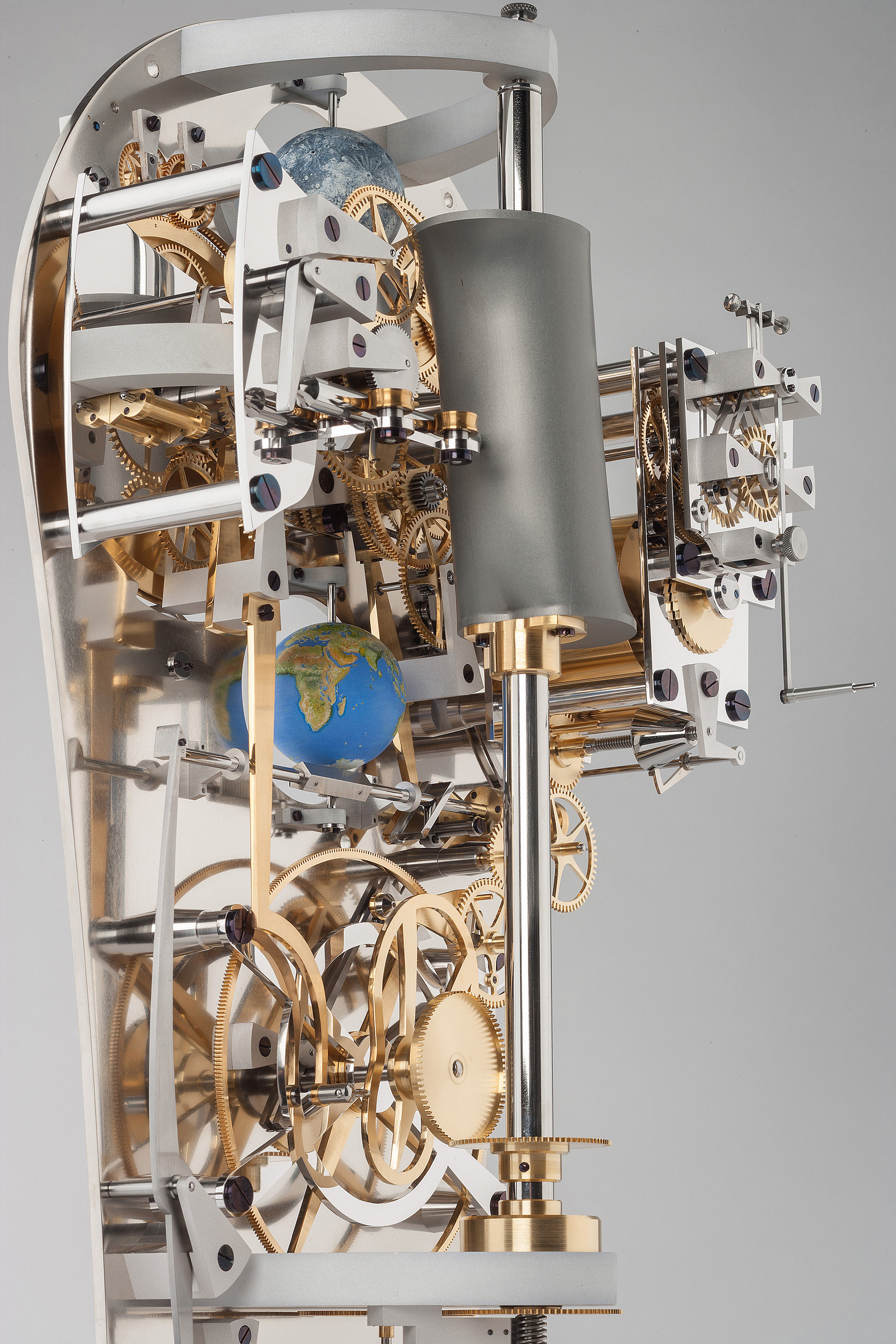 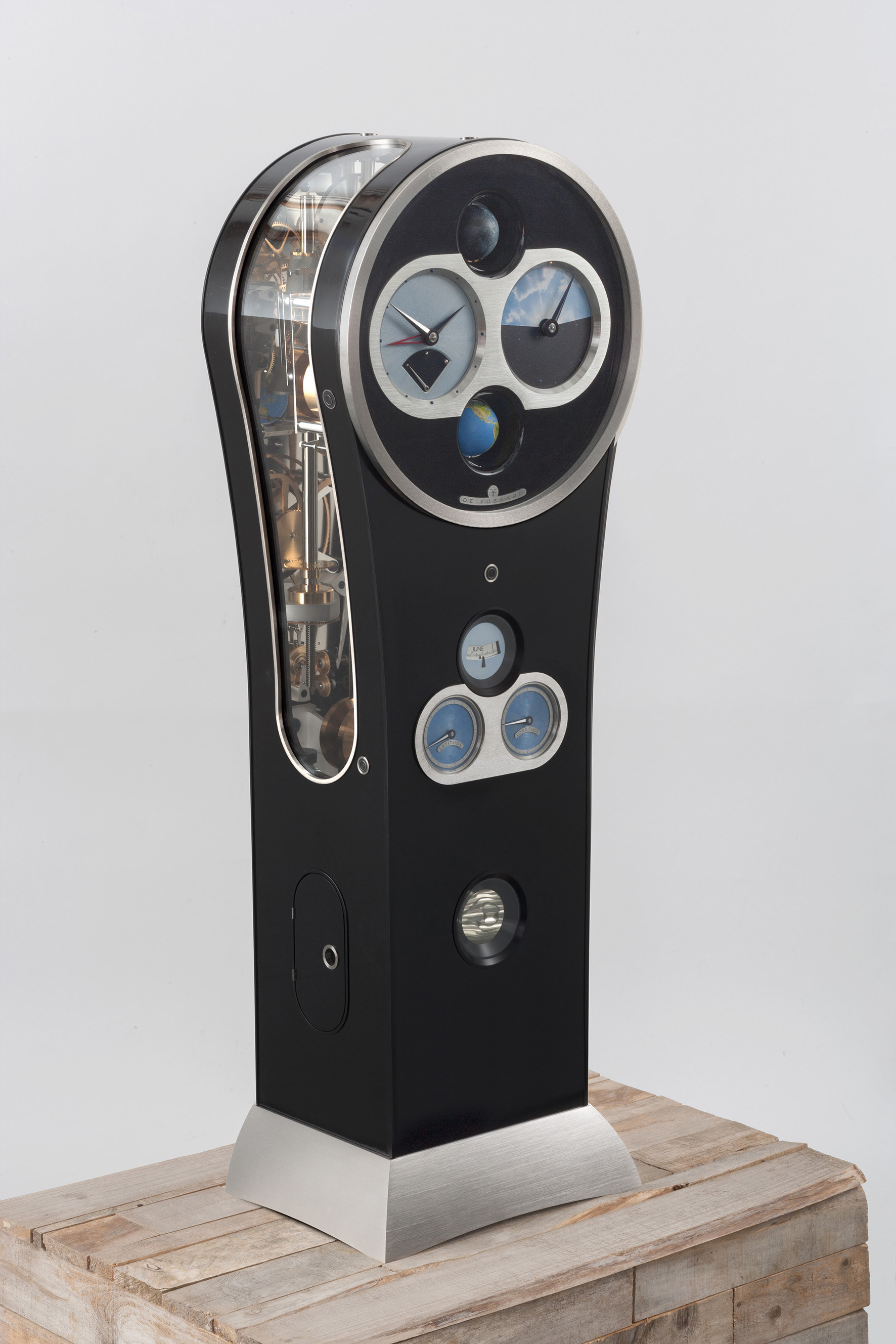 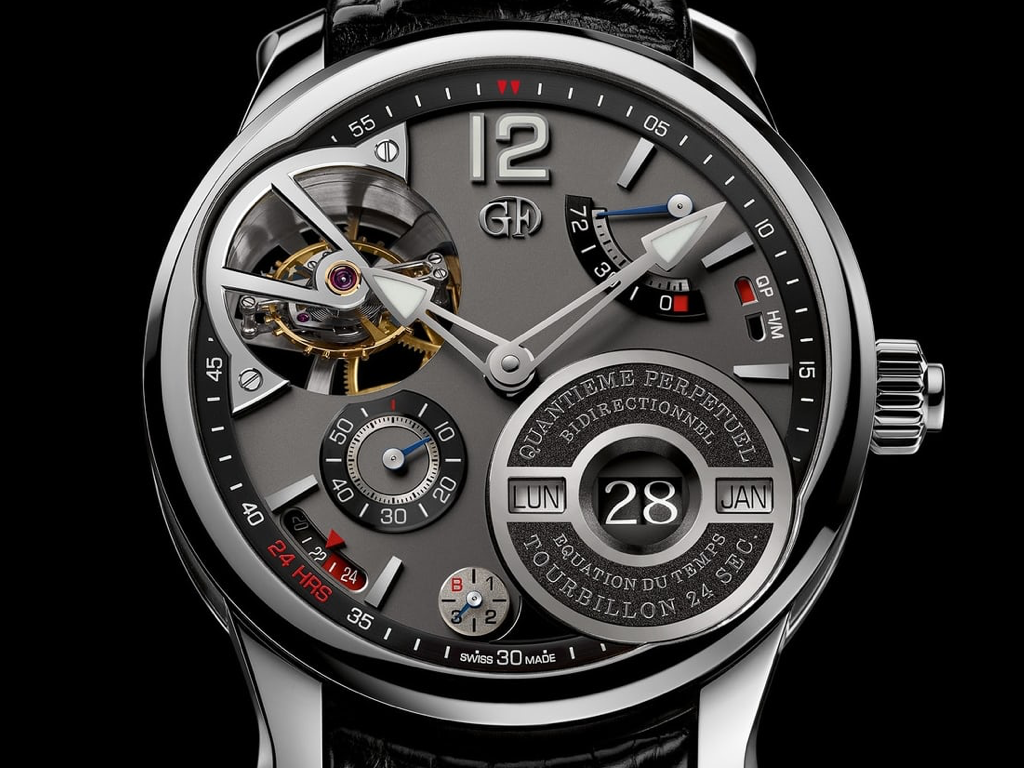 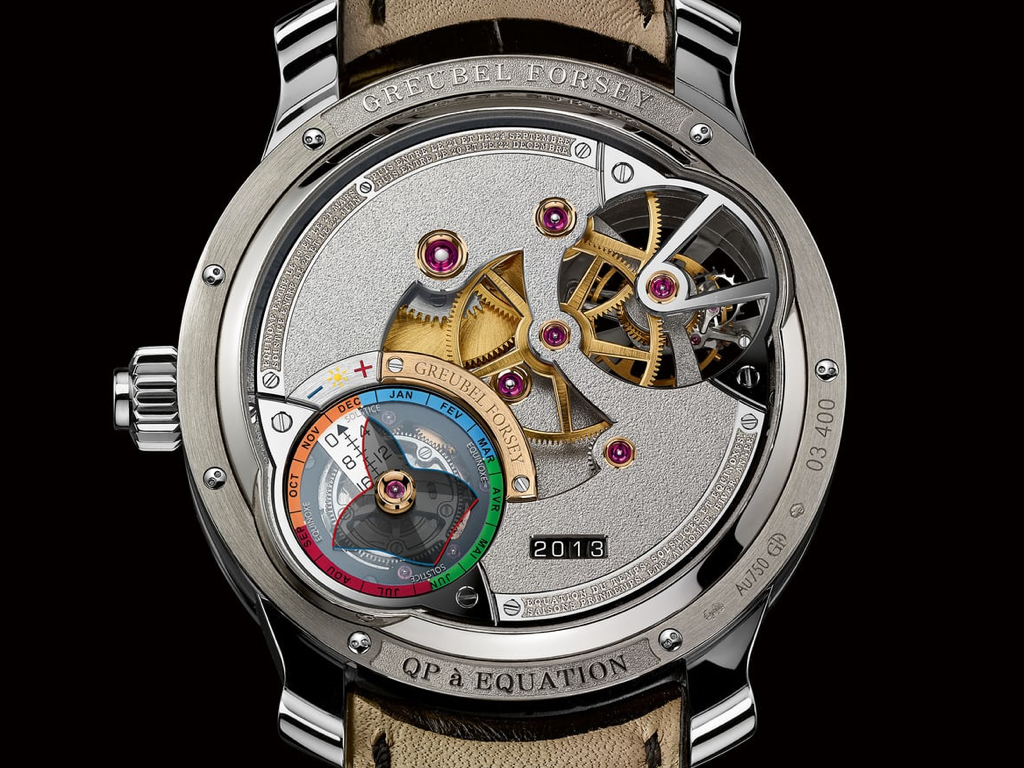 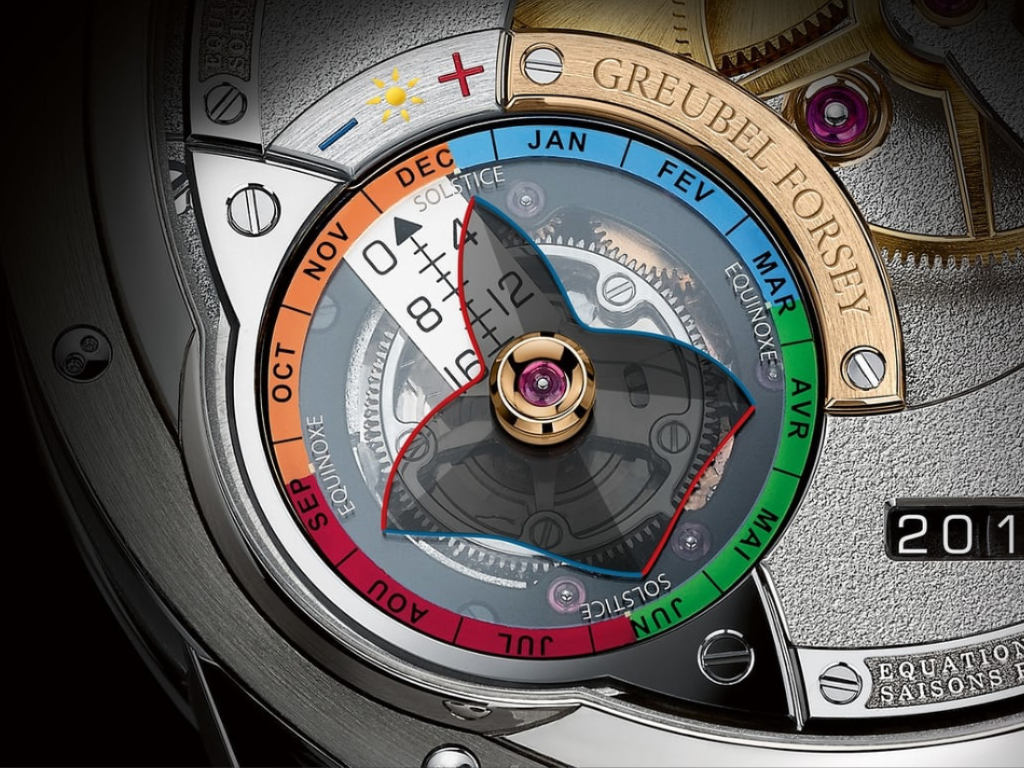