BACKGROUND HISTORY
The overall drive in improved timekeeping was driven indirectly by commercial needs. In the first instance, the need for longitude computation in particular, together with an increasing commercial world, drove the need for accurate mean time devices. In the second instance, the railways and the introduction of the telegraph drove the conversion of local mean time to national mean time.
The move from Solar Time >> Local Mean Time >> National Mean Time followed a slow progressive history, where technical innovations were only gradually culturally accepted. The changes can be divided in a number of phases
Phase 0 - Prior to the late 17th C.  Solar Time becomes the Standard.
Over history, there was much change in time telling. (a) from pre-history, everyone used Circadian Time - what one feels in the tummy and where the Sun is in the sky: still used by gardeners. (b) in Egypt, there were sundials that marked events rather than counted hours. (c) Starting in Babylon and developed by the Greeks and Romans, many designs of sundials were made that told 'unequal hours' - 12 hours between sunrise and sunset, (d) From St Benedict's time, the Church - followed by the Mosque -  'mass' sundials told unequal hours. (e) From the 13th C, Arab mathematicians and scholars developed sundials gnomon parallel to the earth's axis, which read equal length hours. This was Solar Time (or True or God's Time). Most sundials still tell solar time.
Clocks were developing - but they were generally so inaccurate that the difference between Solar Time (or True or God's Time) and Mean Time was an irrelevance to everyone except astronomers. (The latter had understood the concept of mean time for millennia and used the equation of time to correct their prognostications.) This period gradually  ended when pendulum clocks started appear in the 17th C.
Pendulum clocks with a crutch to connect pendulum to escapement, introduced to the world by Christian Huygens in 1656, started what one might call modern horology.They were a great improvement over the verge and foliot mechanisms of the mediaeval days - but they suffered from a lot of friction in the escapement and required an over-wide pendulum swing. Early pendulum clocks had an accuracy of about a minute per day.
Phase 1 - 1680s to mid 18th C - Transition. Slow social acceptance of  Local Mean Time in place of Solar Time.
The use of mean time (some kind of man-made idea) - compared with solar time (God's or true time) - was only slowly accepted in the 17th/18th C. (Bear in mind that Aristotelian natural philosophy was still being widely accepted and taught in the 18th C - notwithstanding the birth of modern science in the Enlightenment.)
This phase started in the 1680s when the 'seconds' or 'royal' pendulum and anchor escapement produced clocks, accurate to a few seconds. Gradually, those using LMT grew from a small number of cognoscenti (scientists and the wealthy) to general acceptance - when most churches had accurate turret clocks.
Phase 2 - Local Mean Time (LMT) becomes the standard.
Relatively accurate church clocks together with domestic clocks and watches are increasingly available. In large cities, astronomers could read star transits and thus set their  watches to local mean time. This time could be broadcast to ship's navigators, clock makers/sellers and the cognoscenti by the noon gun (17thC) or noon ball (1829). Noon balls were set off at 1:00 p.m to allow the astronomers to do their sums. The people of Edinburgh still joke that the noon gun fired each day from the castle is so accurate that it always hits the noon ball at the observatory on the other side of town. It was, of course, the noon ball that was used to signal the firing of the gun.
Still - outside significant cities - clocks had to be set using sundials. The Sundial reading had then to be converted to Local Mean Time by means of an Equation Table. 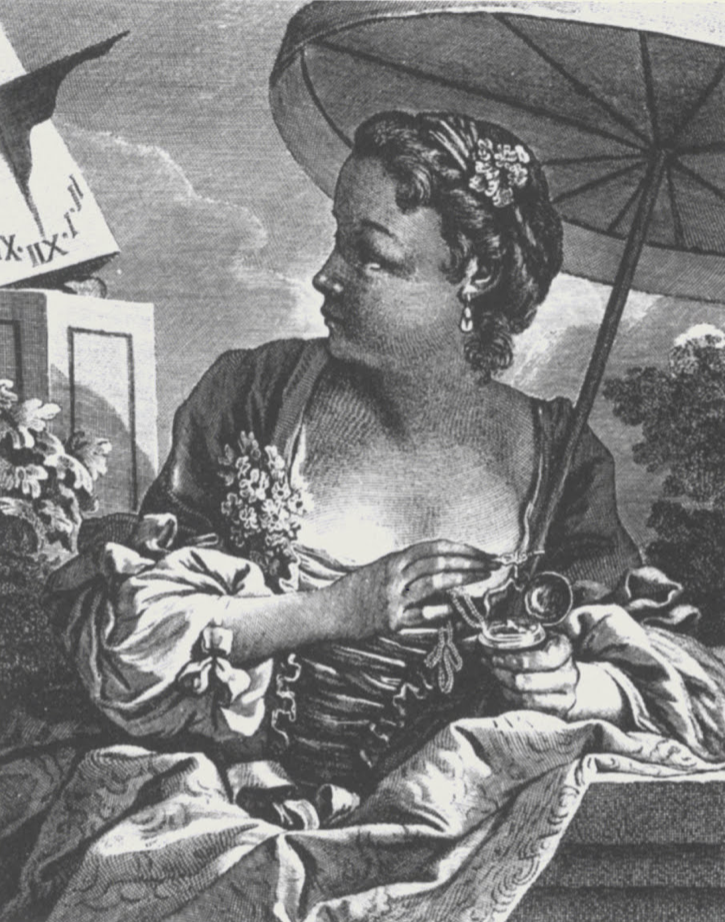 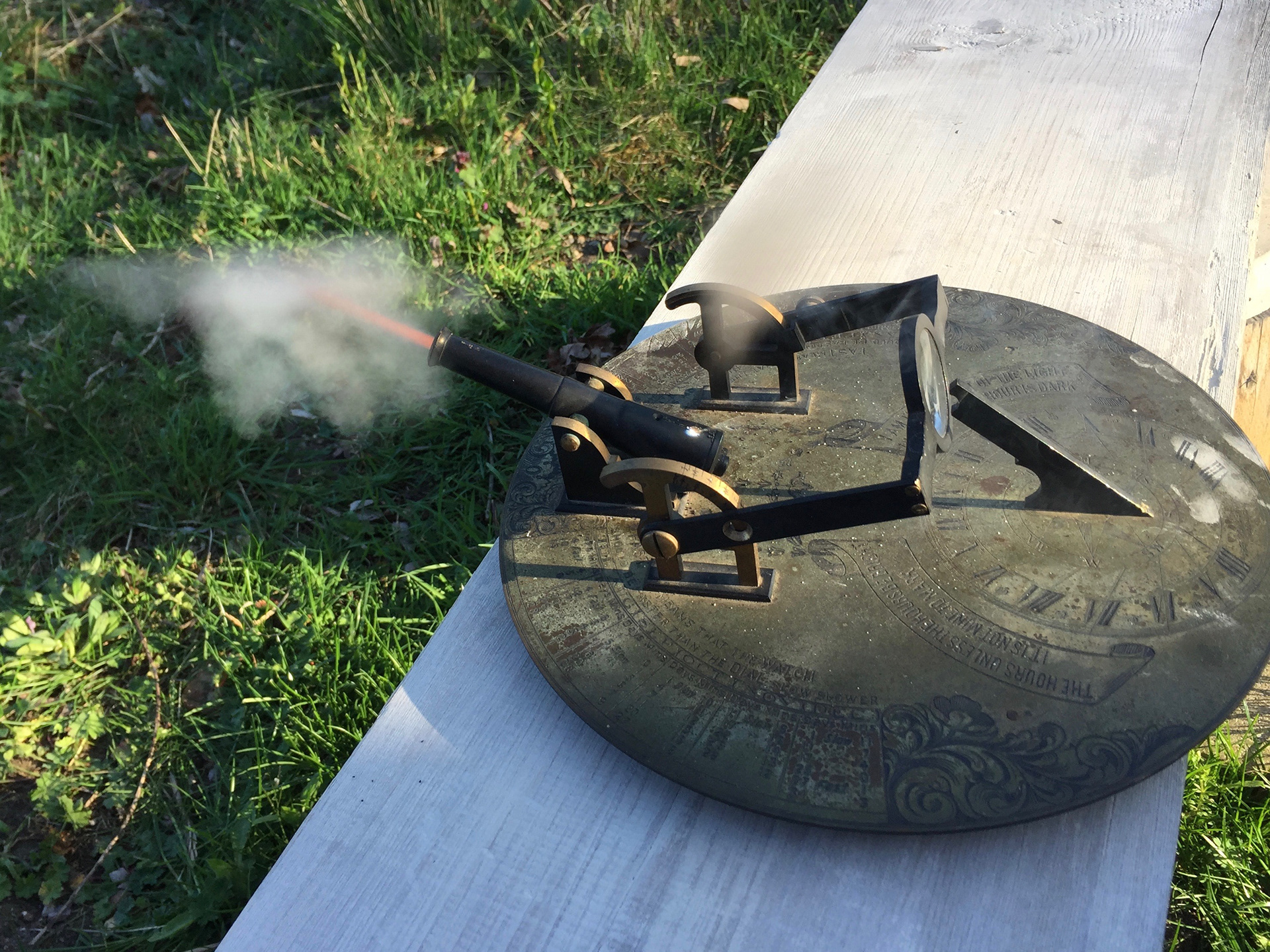 A Sundial Gun or Meridian Cannon. The Sundial would be oriented North/South, the lens would be adjusted according to the declination of the sun. The gun would fire automatically. However, in practical terms, the sundial would be watched until it reached noon, then the lens would be moved to focus the sun's beam onto the gun's touch pan. (This photo was taken in the afternoon!) 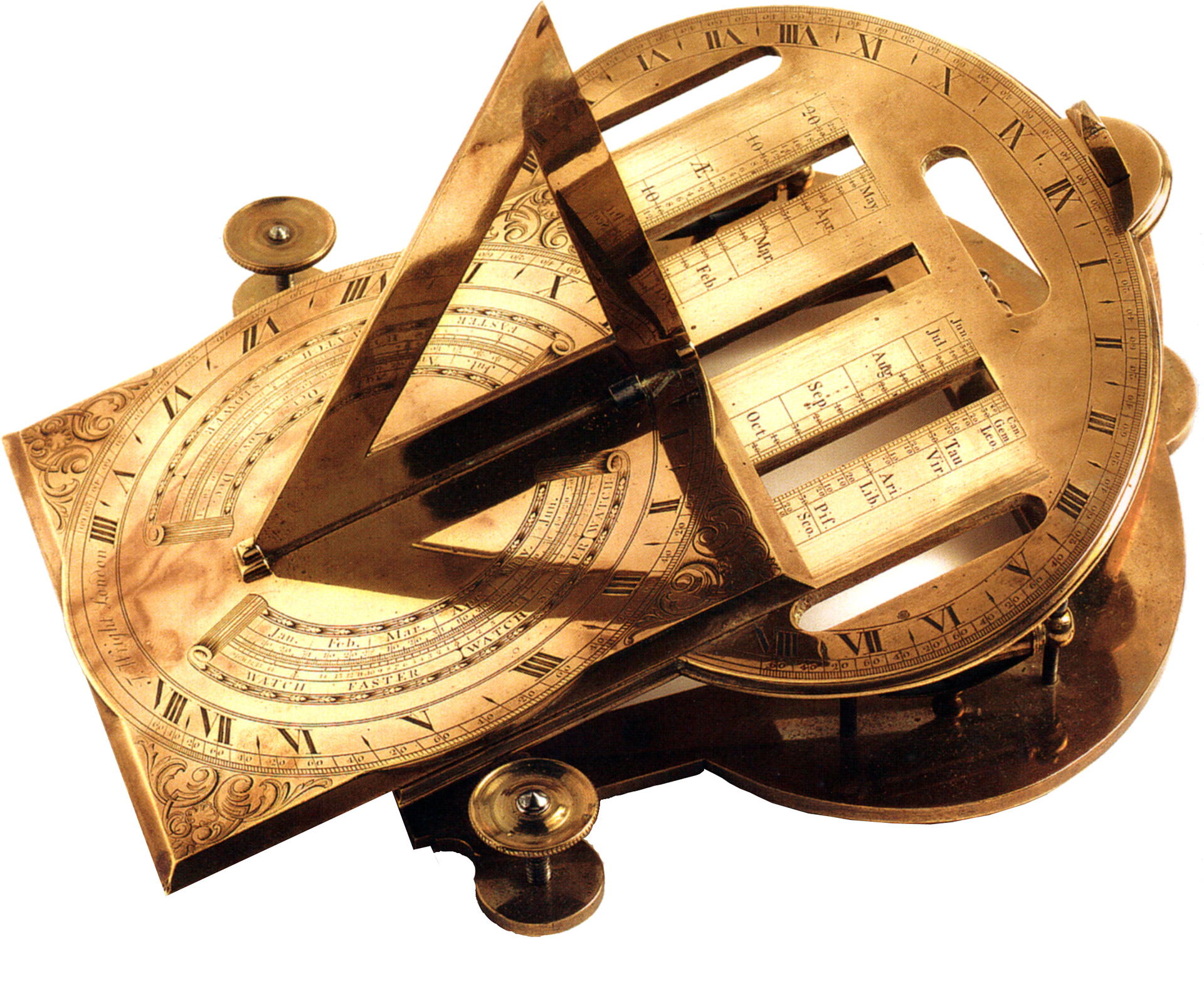 Double Horizontal & Analemmatic "Butlers" Dial - Thomas Wright, London - ca 1740. When the sun was shining, the butler would take such a dial outside and turn it until both dials read the same time. The dial would then be perfectly oriented towards true North. He would take the time, correct it to local mean time from the tables engraved on the dial. He would then return to the house to set the clocks.

Click on images to enlarge & view captions
There were other solar methods to find mean time. For example, at sea, (a) measure the moment of solar noon with a sextant, (b) correct that solar time to Local Mean Time, using Equation Tables given in the nautical almanacs. (Thereafter, one calculated the difference in hours between  local mean time and that of  a chronometer set at a standard longitude. The difference, multiplied by 15, gave the longitude difference between the current location and the standard longitude.) ​​​​​​​

Use of the Sextant to find Solar Noon. Animation by Joaquim Alves Gaspar

The most accurate means of finding Local Mean Time was made by astronomers, using meridian circle telescopes i.e. those whose movement was limited to a great circle through one's location and the N/S poles. These could precisely measure the transit of the sun (or other bright stars) and, using almanac tables, provide LMT. ​​​​​​​

Against this background, in Phases 1 & 2, Various horological methods that reflect the changing cultural needs can be followed in the following four pages.
↑Back to Top